I am possibly the world's best procrastinator, so even though I knew I would be going up to swim Bear Lake on the weekend after the official race I neglected to make reservations at a campsite ahead of time. That was a poor choice because it ended up being the 24th of July weekend, which means there was nothing available. Really nothing. We decided to drive up at 3:30 in the morning on Thursday the 21st, start the swim as soon as we could and then drive home. 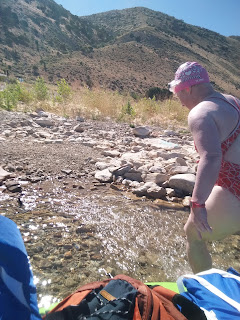 We left on time and had loaded up everything the night before so at 3:30 we were on our way. My husband Kurt is a rockstar and drove up. I could never have done it. I ended up sleeping for most of the way, which created a problem because I was the navigator and we missed an exit, so after passing the Logan exit we circled up around the top of Brigham and through then up through Logan canyon. Also, we hit and killed a skunk on our detour, so yeah, we're awesome like that. We ended up at the gate for Bear Lake marina at 6:20. We went in, did a potty break and unloaded. 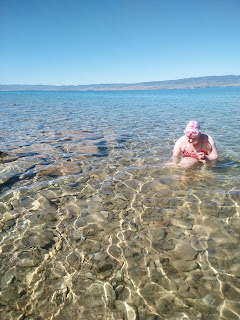 I was in the water by 7:00, but it took me a solid 20 minutes to get in past my waist. Really cold. No wetsuit. Started from the boat launch because it was easier with the kayak, started swimming toward the pointy mountain that Sue Frehse (best training partner EVER) told me about. I couldn't believe how beautiful the water was. Cerulean blue, clear, absolutely stunning. Also so cold. I stopped after half an hour for a drink and after one hour for a drink and some food. Another half hour, I thought we were doing pretty good got a drink. At this point, I started to get cold enough that I was slowing down. I kept trying to go faster to get warmer but it was like my arms were lead and I was swimming through sludge. Also, I was probably a little past halfway and it seemed like I was getting close to the end, but every time I looked it seemed like I was not any closer. It was like I was working for no return. Very discouraging. At about two hours and ten minutes I was sure that I was within a couple thousand meters of the end, it was probably more like 2 miles. I am not spacially gifted, and the distances are deceiving when what you're looking at is a mountain. 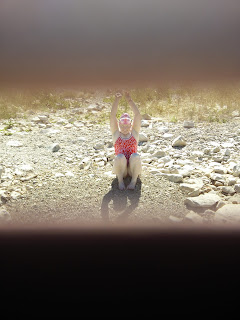 During the last half hour my right ankle, which has always had problems started to hurt so bad I had to throw in some breast stroke, and my hands were frozen open. My nail beds were purple. I was not shivering or anything, but just felt like a popsicle. Finally made it to the shore. I couldn't get out I had to crawl out because my legs were so wobbly. Finished with a time of 3:06. Quite a bit slower than I had hoped for, but I made it, so I'll take it.

So we were on the other side of the lake, but our car was over at the marina, so what did we do? I hopped in the kayak and we kayaked back across the lake. Pretty intense, but a grand adventure. It was pretty fun.